Motivation: When you build a job, also think of the people that have to support/monitor it moving forward. You want to make their life as easy as possible. Keep in mind that they have hundred other jobs to take care of. When your job falls over, it should not require support to dive into a 100 page instruction booklet and to find out how many special case are to consider when restarting the job (apart from also learning how to restart the job). You want to go to them and say: “Hey folks, if the job every falls over, simply restart it”. That’s easy enough. Worry free times. Hurray! Now we will take a look at how to achieve this in a very simple fashion.

The code for the examples discussed in this post can be found here.

This blog post could as well be labeled The world’s simplest restartable job. My main aim here is to have a fast and easy implementation, without any dependencies. It is very simple and very basic.

Note: With this setup you can only execute units of work sequentially and care must be taken within your units of work that everything is really restartable.

Note: When you take a look at the screenshot of the Pentaho Data Integration job, you will notice that the unit of work is represented by a Wait job entry. In reality, this would be a job or transformation job entry. 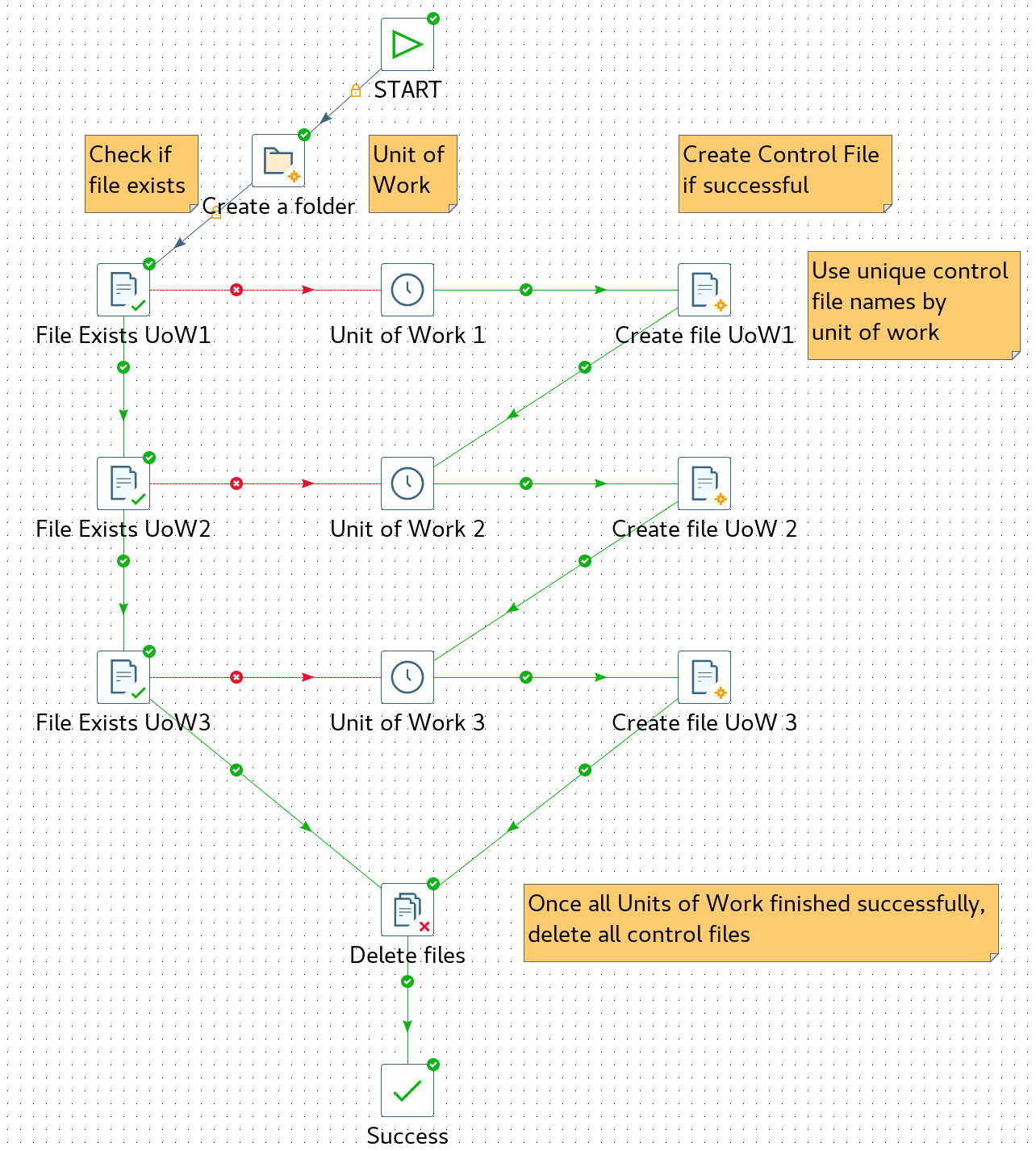 Now that we understand the simple concept perfectly, let’s go one step further. Always creating a master job as shown in the screenshot would be cumbersome, hence, we will create a module/wrapper, which centralises all the functionality we need. The wrapper looks like this: 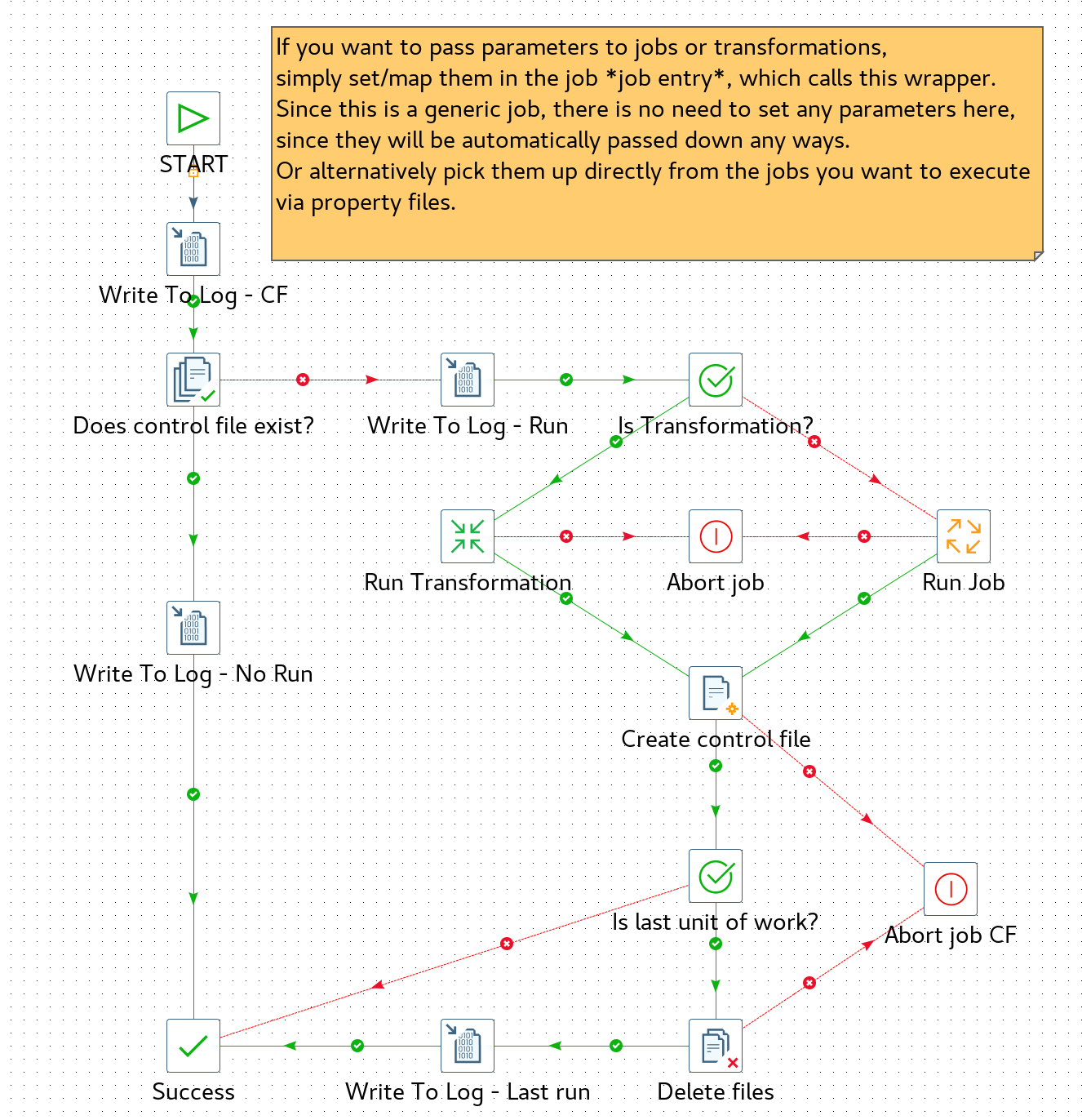 Now from your master job, you can simply call the wrapper and pass down the parameter values: 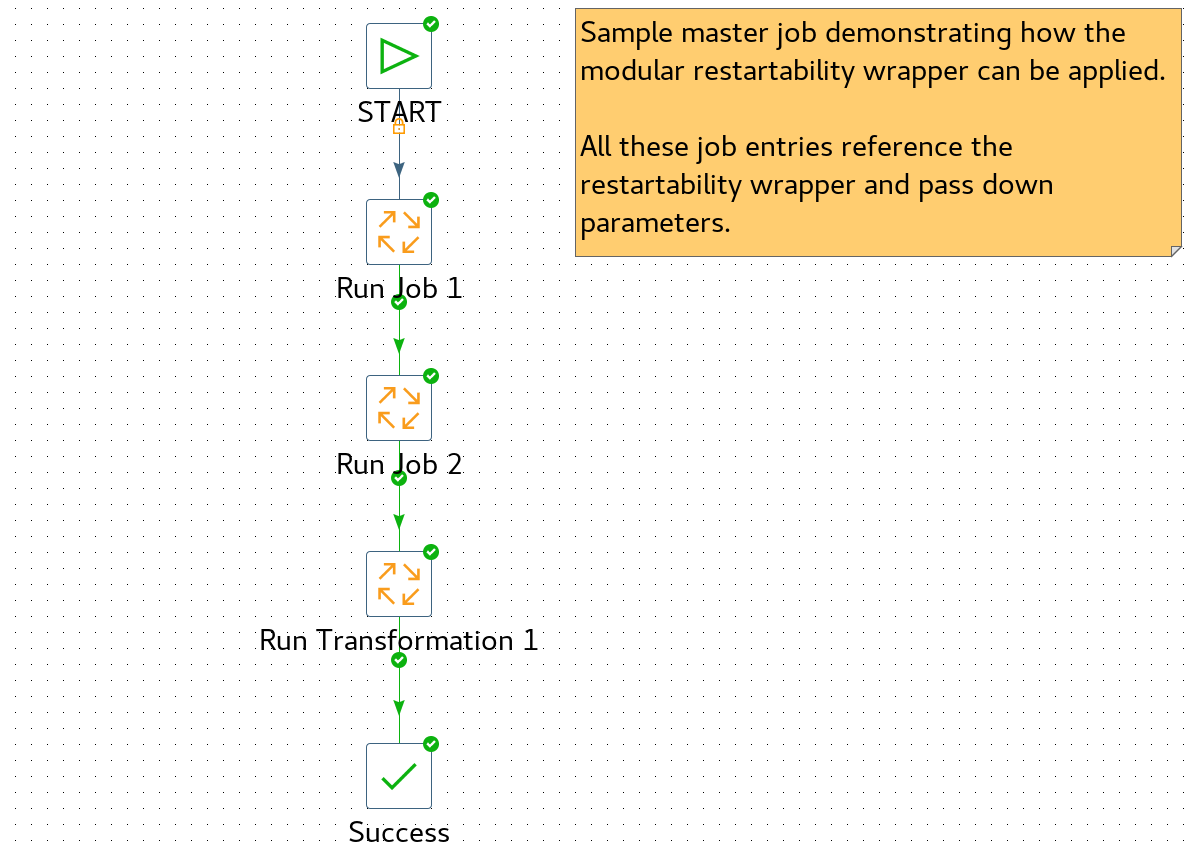 Here is an example of the parameter mapping: 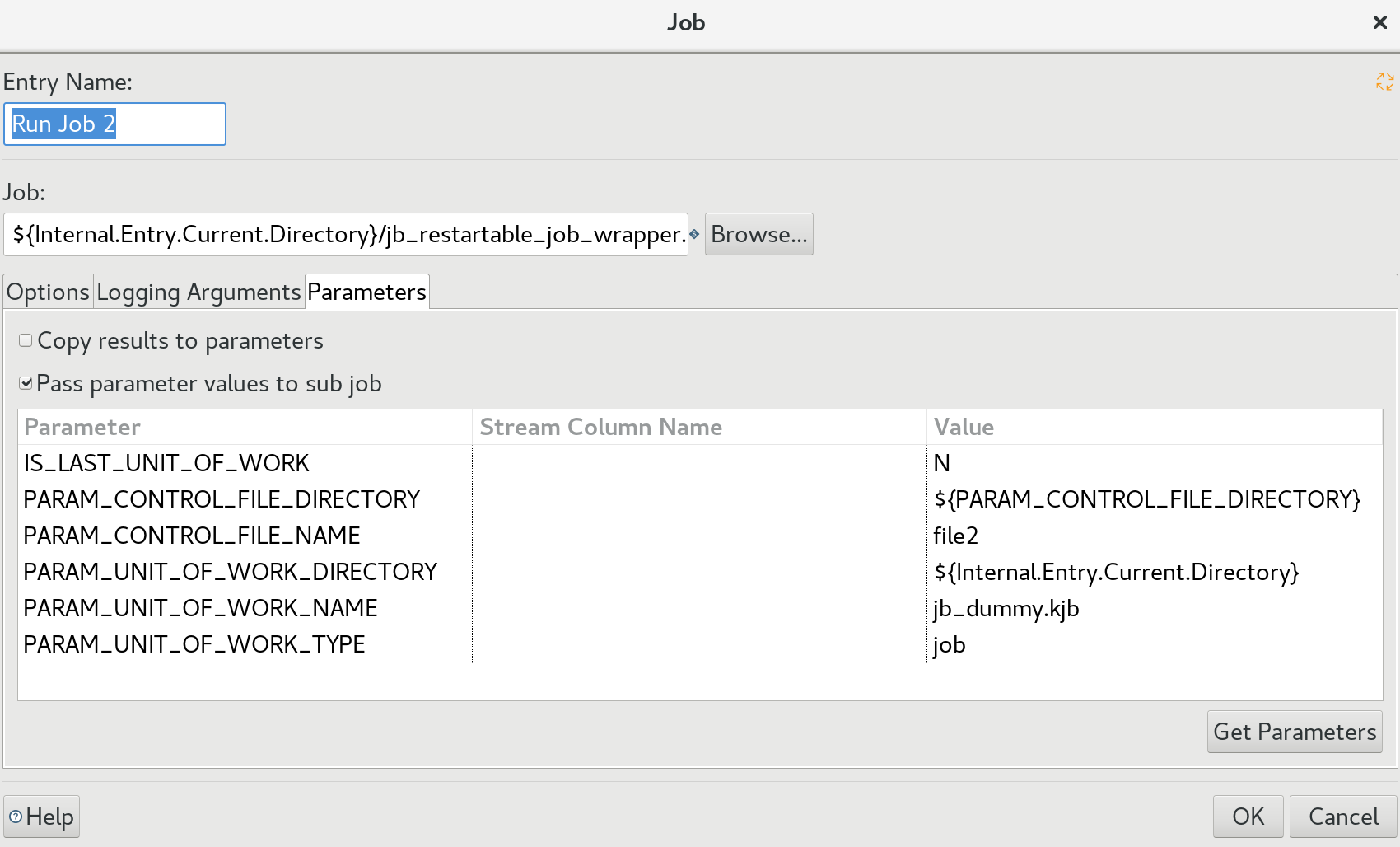 There is at least one more use case we can add. There are two kind of control files we are interest in:

The logic for the master job lock control is slightly different:

The implementation of this looks this:

It is best to keep the logic in separate jobs. Moving forward we will have two wrappers: 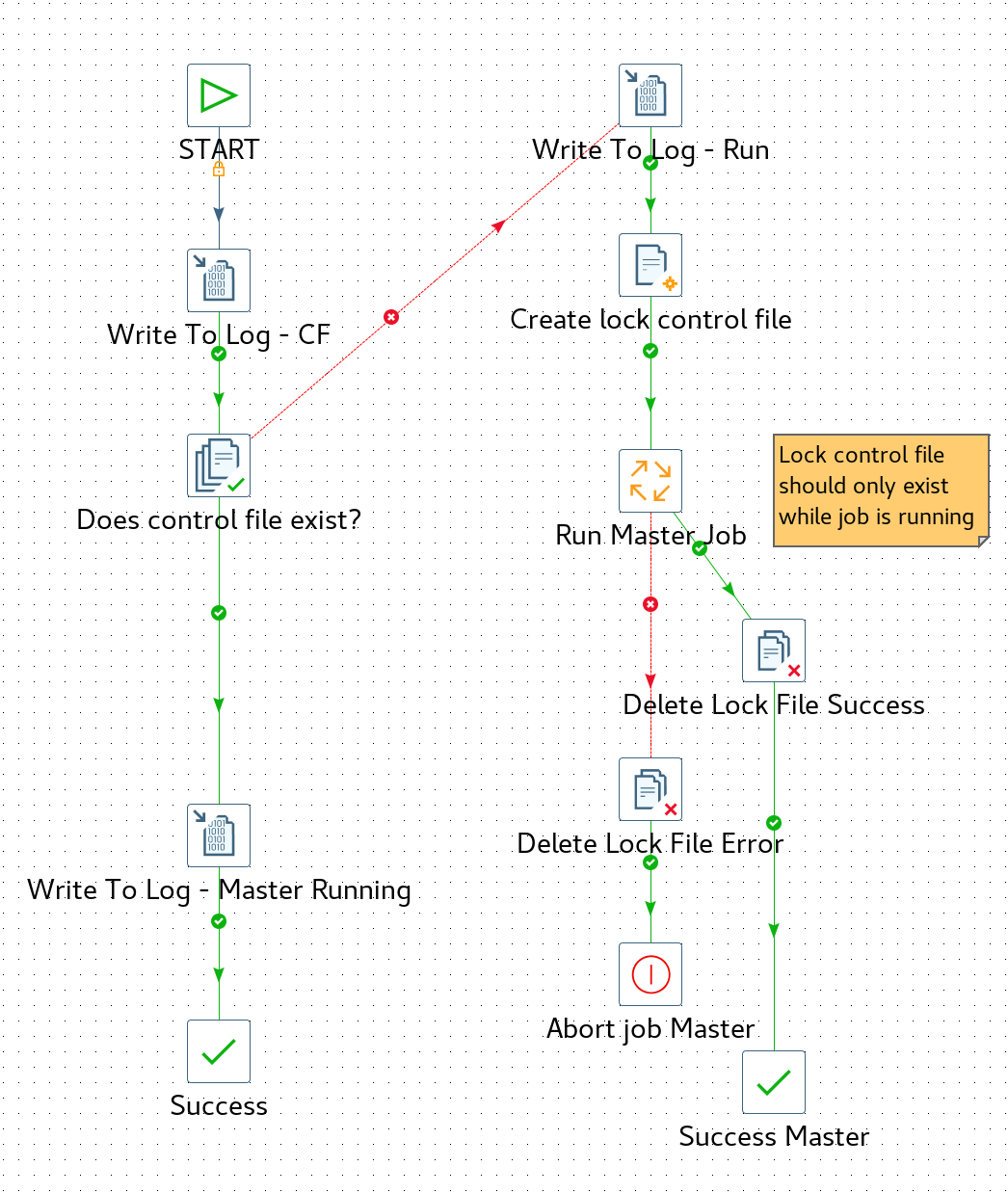 A screenshot of the master job: 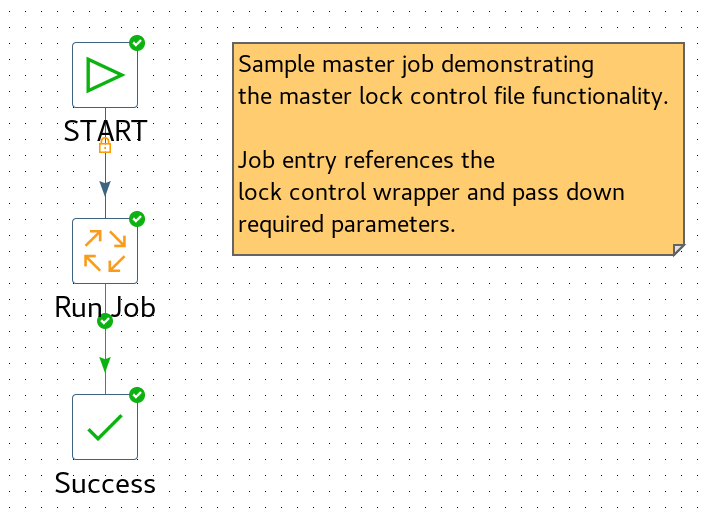 A screenshot of the slave job: 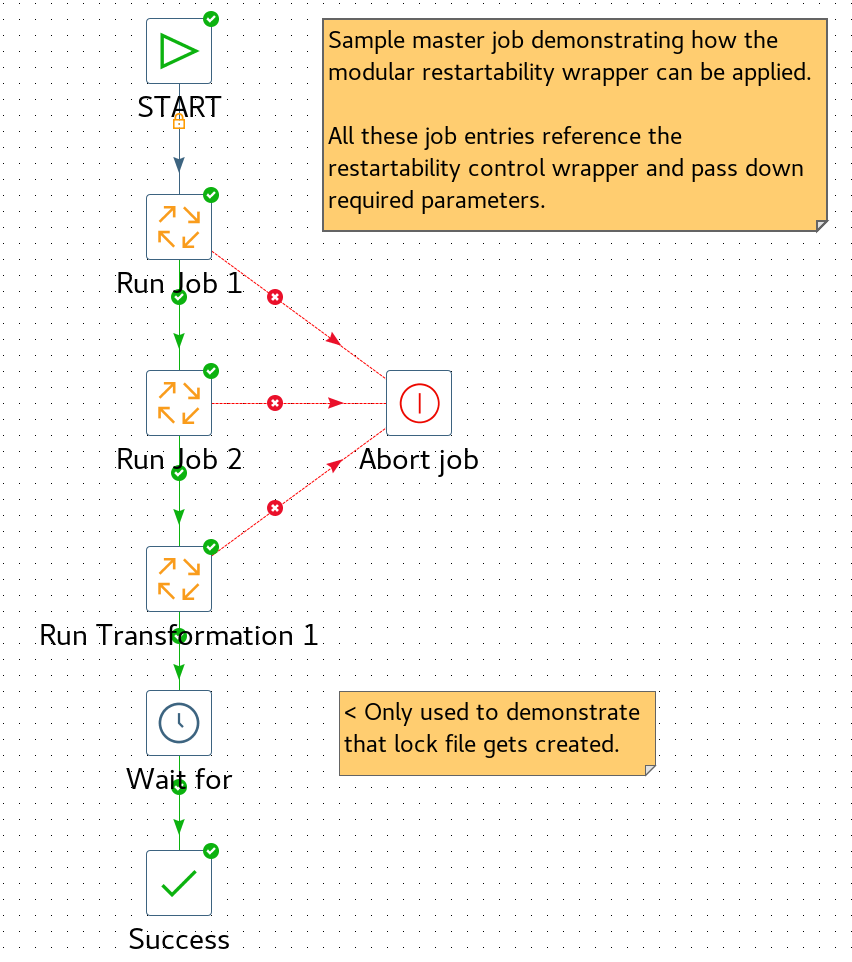 Note: Since the control files are created on the local filesystem, this doesn’t stop someone from kicking off the same job on another machine. If you want to avoid this situation, you can simply write the file to a shared file system, like HDFS. This can be achieved easily by using the virtual file system references, which all of the PDI steps used in the wrapper support.

Why use a wrapper?:

However in this case you rely on whoever uses your modules to use them correctly. What if they forget to use the second module (which has to run as it is part of the common logic)?

A word on the complexity of the wrapper: The wrapper can be as simple or complex as it is required to be. Generally speaking it should be treated like an API: We pass a few parameters to it, what goes on behind the scenes is not essential (but still good) to know as long as the work is completed in a satisfactory manner.

During this project I had a mildly interesting discovery. On the first go I tried to just add the control file functionality to the existing restartability wrapper job, however, this did not work out well for the following reason:

Remember how I told you that using the wrapper to access both features (master lock control and restartability feature), you would have to use two levels of normal jobs:

It turns out that this setup does not work in this case since the wrapper file name is the same - unless: Well, actually, the behaviour is pretty inconsistent. If you use the file base repo (and I assume any other PDI repo), this runs without problems. I tested this with PDI v5.4. If you use the normal files (so not any PDI repo), then you get an error about recursive job usage:

It seems like this inconsistency got cleaned up in PDI v7 at some stage with the uniform referencing system.

Alex Schurman found the references in the code, which show the checks, as well as a related Jira case:

In a nutshell, while it is great to have a check like this in place (that the same job is not used recursively by accident), if you are after a wrapper, that you can use in multiple places of your process hierarchy, then you have a problem. This is not the case in the final setup discussed above, since we have split the functionality into two separate wrappers and these wrappers normally won’t be called on any different levels in the hierarchy.